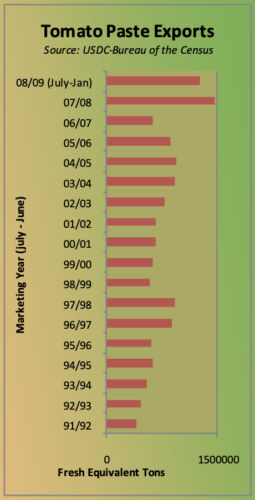 With the arrival of new supplies this summer, prices for bulk tomato products will fall from the dizzying spot prices seen after the 2008 pack. Still, California packers’ opening prices for 2009 bulk products are higher than in 2008. Prices are being driven by the increased cost of raw tomatoes and expectations tight supplies globally.

Single season contracts for 31% NTSS paste in bins are expected to be around 47¢ per pound, an increase of 5¢ from opening prices last year. Bulk diced in 300 gallon bins is selling for 20¢ cents per pound, a penny above 2008’s opening prices. Customers continue to pay a 3¢ premium for more expensive drum packaging.

Since raw tomatoes compose about 56% to the cost of bulk tomato paste, a record high $80 per ton is driving up manufacturing costs. Paying $10 per ton more for tomatoes adds 3.3¢ per pound to processors’ costs.

Raw tomato prices are just part of what is driving the price of domestic bulk products. Supply and demand economics are also at work. Worldwide there is a shortage of processed tomatoes. For several years, production has not kept up with growing demand, according to the World Processing Tomato Council.

This shortfall is driving paste prices. Despite the record crop forecasts, tight supplies are still anticipated after the 2009 pack.

As the table above reflects, 40 million MT will just barely cover the expected demand for the 2009 pack. And, as an additional caveat, production is likely to fall below expectations. The US and China — both forecasting the largest increases— are unlikely to be able to process their projected volume. As a result, it’s probable that the global production will total closer to 39 million MT, leaving supplies tight again. 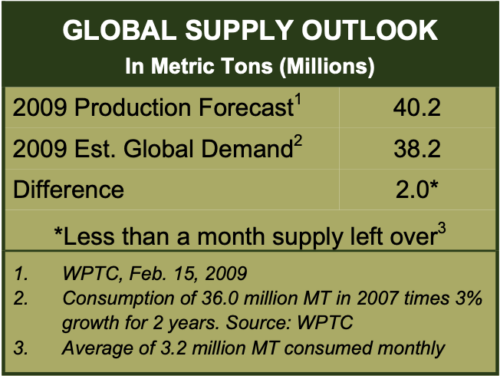 Movement (demand) of US tomato stocks is up 16% from June 2008 to March 2009 over the same period last year, according to the California League of Food Processors.

This increase is driven mostly by soaring international demand. From July 2008 to January 2009, exports of US paste were up 110% over this same period last year. (See graph at right.) This is remarkable since the US exported a record volume last year.

It’s likely that exports of paste will slow in the coming pack year as economics cut into the US’s price competitiveness. The dollar has strengthened off its lows last summer and California packers’ costs are up more than other exporting countries due to the raw tomato price.

With that said, there still seems to be ample opportunity for US paste in the global market. Italy is not forecasting significant increases in its production and Turkish expectations are down. China has forecast a big crop but is notorious for falling short of its expectations. Expect US exports to hold near the current high levels and not returning to pre-2007 volumes.

Despite the free-fall of the global economy, consumption of processed tomatoes is not showing signs of weakening. Processed tomatoes are one of those items people seek out when purse strings are tight.

Processed tomatoes are a flexible food, packed with flavor. They make an affordable extender to recipes and add numerous health benefits people’s diets. Additionally tomatoes are plentiful in popular, economical foods, like pizza, pasta and ketchup. 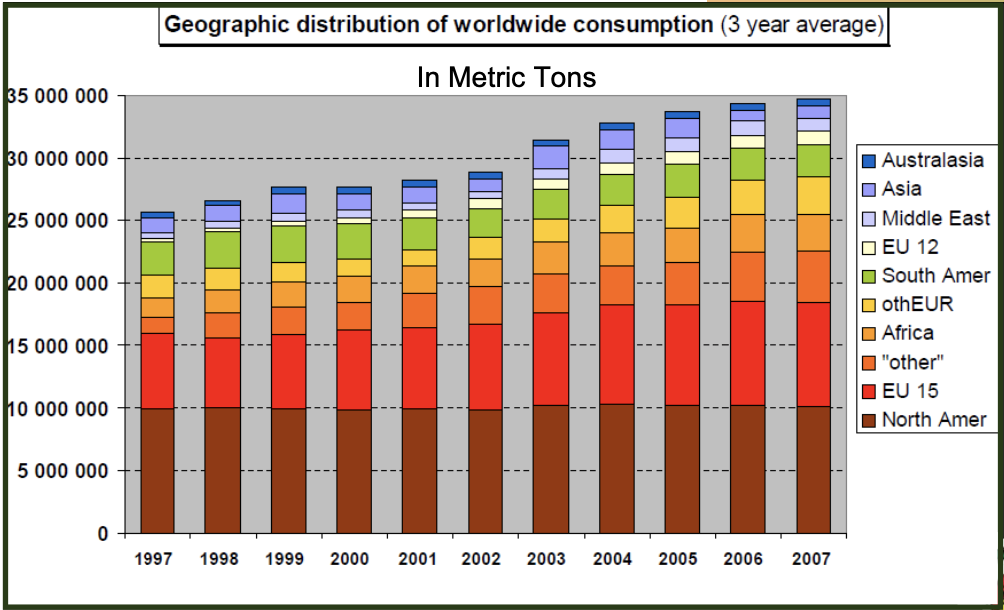