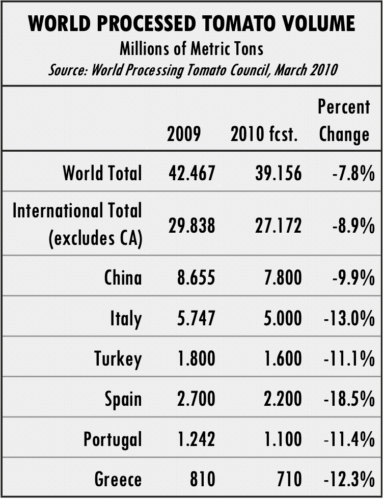 Removing California’s zeal‐ ous forecast leaves an even greater drop of 8.9% in international production. Outside California, countries expect to pack 27.2 million MT. Although less than last year, it’s still 5% above the 3 year average.

Unlike the rest of the major tomato growing regions, China’s packers are paying more for tomatoes this year than last. Tomatoes are competing for land with cotton and sugar beets, driving up prices $2 per MT, to $56 for 2010.

In Europe, processors are drop‐ ping their demands for tomatoes and the price. Italy’s production is forecast for 13% less to 5 million MT. The price of tomatoes for paste has fallen 12% in Italy.

Heavy rains assaulted Italy and growers struggle to prepare their fields and transplant seedlings. In the south, planting has been delayed 7‐10 days.

Spain’s forecasts are down 19%, to 2.2 million MT. Planting has been delayed two weeks due to rain.

On February 27th, a powerful 8.8 earthquake destroyed some of Chile’s 2009 and early 2010 tomato stocks. Tomato News reported that Chile’s 2010 pack is now expected to fall below forecasts, but on par with 2009. Losses could have been even worse, but a cold spring delayed the harvest by two weeks so packers hadn’t gotten as much stock into their warehouses as normal.