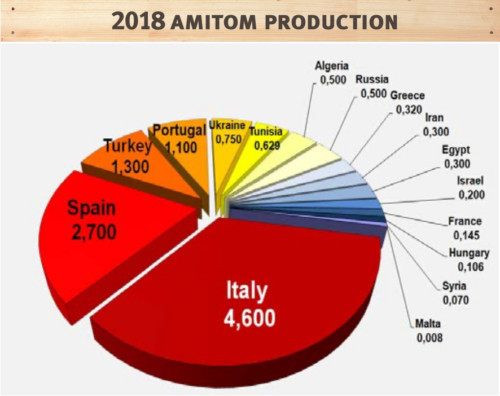 Portugal enjoyed good weather, with high temperatures and no rain at the end of the season. While yields suffered slightly, quality of the fruit still retained high brix.

Spain suffered some difficulty with storms at the end of September and, combined with very high temperatures, caused some crop losses. Yields remained high and quality was good for the remainder of the season.

Northern Italy processed 2.4 million mT, with weather remaining pleasant through the end of season. In general, quality and color of the crop were good but brix saw a reduction to

While the weather was positive in Xinjang, high temperatures experienced in July forced early maturation of tomatoes, leading to waste and lower yields.

China also experienced the pressure of increased environmental protection regulations in 2018, causing only a limited number of factories to be able to comply and still process. Processing capacities in those factories were also decreased because of the new regulations.

One large market disruption in China was the withdrawal of Chalkis, the second-largest processor, from the marketplace, causing 13 factories to be put up for sale.

Overall, 2018 witnessed a contraction in total global production. As we can see from the long-term global processing evolution, this industry is highly cyclical with a general upward trend; however, peaks and valleys are a consistent attribute of the global market.