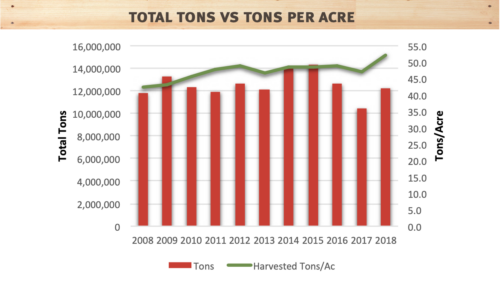 The 2018 season is now one for the history books. While California tonnage increased from 2017 levels, the real star of the season was a record 52.5 tons per acre, up from 47.1 in 2017, setting a new efficiency record for California. The average may have been even higher, due to some contracted acres not being harvested. Organic tons also increased by over 90,000 tons from 2017 for a total of 523,312 tons in 2018.

Crops faced many challenges this year, ranging from delayed plantings to infestation of the darkling ground beetle, and hot temperatures in the southern regions (Fresno set a record of 30 consecutive days over 100 degrees). Record yields in 2018 can be attributed to a few factors: good, dry temperatures in January and February, rain in March, and farmers’ creativity and management of drip irrigation despite high heat situations during the summer.

As always, water played a critical role in this year’s crops. This season saw increases in allocations south of the Delta and CVP ag water allocations in June were raised to 50%. The coming years will witness some changes in regulations, particularly California’s SGMA (Sustainable Groundwater Management Area). Passed in 2014, this Act calls for plans for achieving sustainability be turned in by January of 2020 for high and medium priority basins. Agencies in areas with low priority basins have until 2022 to submit plans. As a result, farmers may not have the same amount of groundwater to supplement surface supply as has been the practice.

During the period from October 1 of 2016 to November 18 of 2018, 71,551,700 ac. ft. of water flowed through the Delta. 16% was captured by Federal and State pumps to move water south for consumption by both Agricultural and M&I use. 81.4% flowed out to the ocean. 2.3% of the inflow into the Delta was Net In-Delta consumption. Using 2.5 ac. ft. per acre for tomato water consumption, this would equate to being able to grow over 23 million acres of tomatoes with the water that flowed out of the ocean. SGMA requirements will put more pressure to come up with more efficient use of water.

Secretary of Interior, Ryan Zinke, and Secretary of Commerce, Wilbur Ross, signed a Memorandum of Agreement, ensuring that the Presidential Memorandum on Promoting Reliable Supply and Delivery of Water is implemented as quickly as possible. This Memorandum is important for California agriculture, particularly because the State Water Resources Control Board would like to seize San Joaquin Valley water supplies that, in their own words, would create a “permanent regulatory drought.”

As for 2019, current industry talk is that demand for tomatoes for 2019 will resemble 2018. Year over year, we can see that demand stays consistent but due to a host of factors, supply can vary greatly.