Domestic Crop: Anything Can Happen During Long Tomato Season

Harvesters have begun picking tomatoes in California’s fields and the industry expects to be going full tilt by the middle of July. Packers and growers are anxious about this year’s crop because of its size and the high price of tomatoes. Forecasts are for a record setting crop over 12.5 million tons, and packers are paying a record $80 per ton for the tomatoes.

Although riddled with minor setbacks during the planting season, overall the crop outlook is excellent. Sources close to the field report, “There are a lot of tomatoes out there.” If current conditions hold, the crop could produce above average yields of 40 per ton for the third straight year. 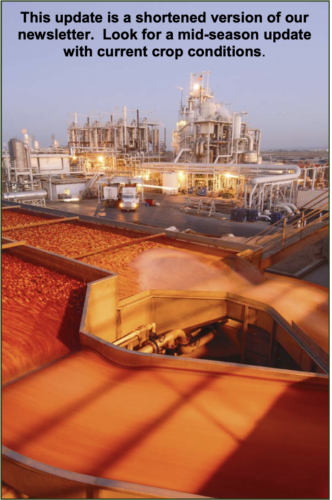 With that said, California has a very long season, and anything could happen between now and October. If damaged by a prolonged heat wave, rampant disease, or heavy rainfall, this bumper crop could easily turn into a dud.

Even if Mother Nature continues to cooperate and produce a bounty, growers and packers face the logistics of actually processing such a massive crop. To meet forecasts, the industry needs to handle an average of one million tons over the 12 week season, or have the pack extend through the end of October.

A big concern for a crop this large is the potential of “getting behind the crop.” This means that the tomatoes ripen before the growers or packers can harvest or process them. Quality drops if the tomatoes are over-ripe. The fruit becomes too soft for the rigors of processing.

Unfortunately, water allocations for the Westlands Water District, which encompasses most of Fresno county, have been strapped. Governor Arnold Schwarzenegger wants President Obama to declare the county an economic disaster area. According to USA Today, nearly 262,000 acres are going idle this summer leaving 40% of farm workers in the county unemployed.