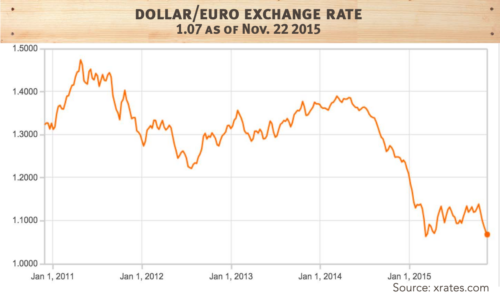 The international production of tomato paste has increased steadily in the last two years. While processors constantly have to deal with ever-changing field prices, inventory levels, oil prices, and market pricing, 2015 marks a particularly unique hurdle faced by California producers: the exchange rate.

California has increased its total production capacity by approximately 1,000,000 short tons in the last two years. Exports, in the same period of time, experienced a 7% decrease. As a result, we may expect to see a decline in total production for California in 2016. 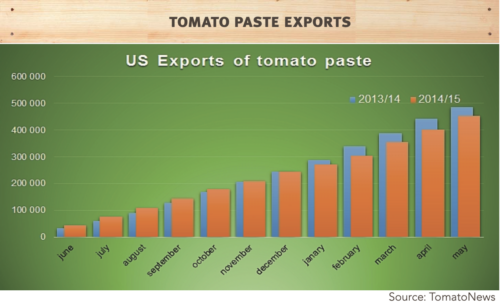 EU markets, in particular, offer several specific challenges to U.S. producers, such as a 14.4% protective duty and expensive ocean freight rates. Chile and the Ukraine, on the other hand, enjoy duty exemptions with EU countries (limited to 10,000 MT/year). Large crops in Spain, Portugal, and Italy have spurred aggressive pricing in an effort to regain volumes lost to California in past seasons.

While the exchange rate does pose new challenges for California processors, other factors may indicate this reduction in exports could be short-term.

Italy alone imports the largest amount of California paste, peaking at over 200 million MT per year. Most of this is reprocessed and re-exported (with no duty paid) to African markets where product is sold in USD. In markets where products are sold in USD, the strong dollar is not necessarily a detriment when converting back against local repacking expenses.

Overall, the challenges of a strong dollar will have processors around the world re-evaluating pack plans for next year based on expectations for imports and exports in their region.