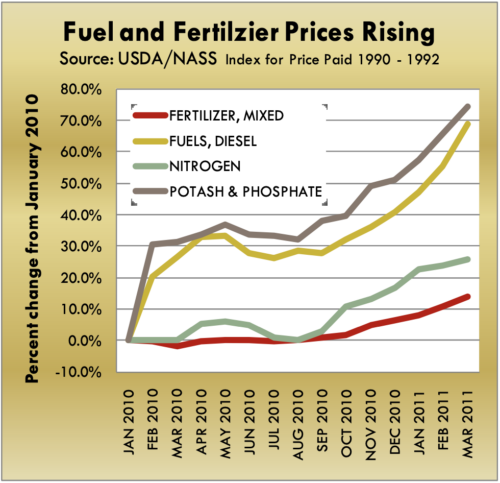 It’s impossible to say what the market price is for bulk tomato paste. There is no exchange or independent pricing mechanism to indicate the price. Bulk tomato products are mostly sold under long-term contracts, with prices linked to processing costs. Those costs are going up.

Despite excess stocks of processed tomatoes, the cost to make tomato paste is increasing. California packers are paying 4.6% more ($68 per ton) for raw tomatoes this year. Tomatoes are the biggest component (53%) of the processing cost for paste.

No, the price of raw tomatoes is not defying eco‐ nomic gravity and ignoring the surplus. Much like in 2008 and 2009, tomato prices are being propped up by rising profits of competing crops and escalating fuel and fertilizer costs.

Cotton, corn, wheat and other food commodities are in short supply worldwide and reaching notably higher prices than last year. Since these crops can be grown on the same ground as tomatoes, packers needed to pay growers more to compete with other profitable options for land.

Cotton, in particular, is “red hot” as market prices have doubled from a year ago to reach 150 year highs. The United States is the world’s leading exporter of cotton, and domestic stocks are at all time lows. Growers are planting cotton anywhere they can.

Corn production worldwide has not kept up with demand. Supplies are at their lowest levels in 15 years. Demand for corn is growing domestically and globally, pushing prices to double last summer’s level.

Globally, demand for corn is driven by the rising middle class in developing countries like China and India. As people gain more wealth, they can afford more meat protein, and beef and pork production requires a lot of feed corn.

Competition from other crops is not the only driver of higher tomato prices. Growers are facing higher input costs in the coming year. Fertilizer prices, which had fallen from their 2008 highs, are drifting upward. The worldwide food shortage means more acreage is planted which increases demand for fertilizers. Political unrest in the Middle East is also affecting costs, since the region is a major exporter of fertilizers and fuel.

The bottom line: If you only looked at inventory levels in packers’ warehouses, tomato prices should be falling—the victim of inertia in a surplus environment. That happened last year when packers paid 18.7% less for tomatoes. But current eco‐ nomic pressures in the field are very similar to those of 2008 and 2009 which sent prices to record levels of $70 and $80 per ton respectively.

It’s likely that if inventory levels were normal, the price of tomatoes would have spiked up sharply.