Current global processing estimates are at 35.3 million metric tonnes (mT). Climate challenges seem to be the root cause of this reduction from the beginning of the year’s estimate of 37.1 million mT. Many countries are now having to face the prospect of processing in the higher risk months of September and October.

Portugal experienced a late start to their summer, with cooler temperatures causing the tomato plants to experience a slowed development. With a target harvest date of August 10, Portugal will likely only process 30% of their harvest by the end of August, a significant reduction from their typical 50-55%.

Spain similarly was impacted by their cool weather, expecting to begin harvesting on August 1 in Andalucia and August 10 in Extremadura.

Typically, Spain begins harvesting on July 10 and July 25 for those respective regions; however, excessive dew and humidity forced growers to treat
their crops. Spain is now expected to process the bulk of their harvest in September.

Northern Italy is enjoying very standard conditions but reduced its crop by 10% and is currently forecasted to process 2.45 million mT. Central and Southern Italy faced the challenge of potential drought conditions, reducing yields.

Greece has been blasted by rain storms and flooding, increasing the disease risk significantly. Harvesting has already begun in the growing regions, but forecasts have been reduced 15% to 360,000 million mT.

With strong competition from the fresh and sun dried markets in Turkey, spot prices for tomatoes are high. Turkey has maintained the same estimates from their February forecast, expecting volumes to gain momentum now that harvesting has begun.

Canadian tomato crops are strong this year in terms of quality, with volumes expected to hold.

China expects to process 3.7 million mT and with weather conditions on par, they should be able to achieve their estimate.

While the global growing conditions have caused a reduction in total production expectations, the economics of the industry are favorable for EU products. In 2017, EU sales increased by 6%, no doubt a result of the US Dollar’s exchange rate. Exports from California dropped by 27% (128,000 mT) as a result of the decrease in the Euro’s strength. What makes this drop even more significant is that it occurred during a time when global paste volumes were stable.

Spain accounted for the most significant portion of the EU’s paste export growth, increasing 27% between 2016 and 2017. The majority of Spain’s exports were sold to Germany, Italy, the UK, Portugal, Japan, and Oman.

Portugal’s export sales increased 12% and their destinations included the UK, Japan, Australia, and the Netherlands. Conversely, Portugal did not sell paste to Kuwait, Saudi Arabia, and Russia as they have in previous years.

While 2017 was a productive year for Italy, its exports were less than would be expected. Italy returned to 2014 levels of exports, with the biggest drops in exports coming from reduced shipments to Germany, Libya, Austria, and Sudan.

Despite export volumes increasing, low global prices for paste have limited the financial impact of this growth. Total exports between 2014-2016 and 2017 fell 0.8% (including the U.S.), while the revenue generated from those exports fell 13% in the same period of time.

Economic factors, particularly global inventories (in particular, U.S. inventories have decreased by 23%) and crop reductions, have positive implications for the future. 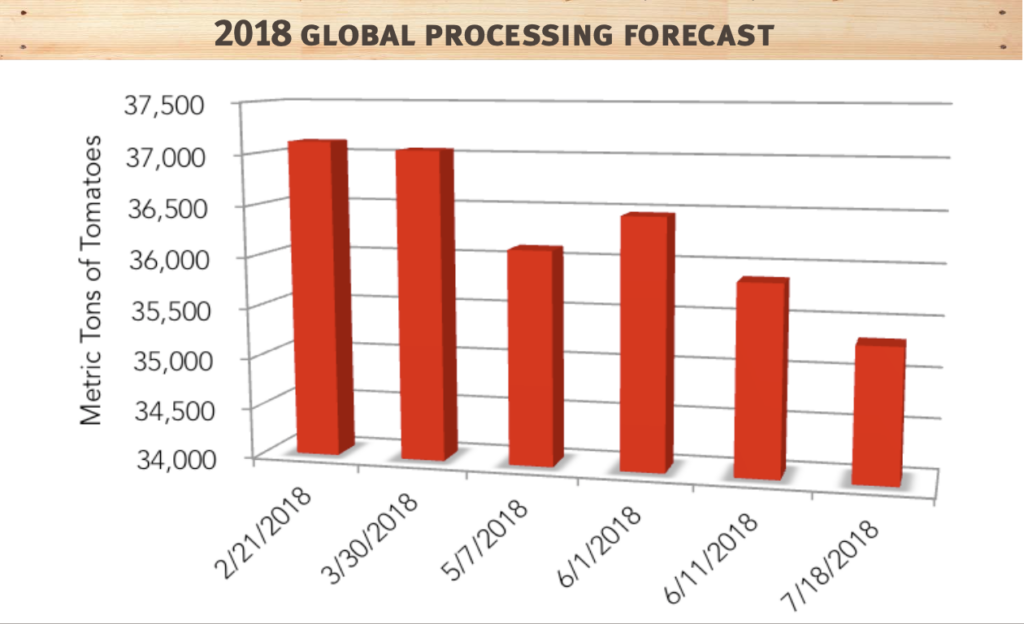