Finished tons may have fallen short of initial intentions but still saw an increase from 2019.

Another year of tomato harvest has concluded in California, and the only thing typical about it was that it was atypical. We could characterize it as a season with multiple high heat periods capped off with smoke-filled skies from the California wildfires that raged the last half of the season.

The 2020 season finished with 11.31 mm tons, far behind the May intentions of 12 mm tons. Amidst the Covid-19 pandemic, it was fortunate that California could still process the tons from seed to factory.

Many factors contributed to the decline in state tonnage. The high heat periods hurt the tomato fields, especially those at a full bloom stage, and high humidity influenced plant transpiration reducing its potential.

Battles with spotted wilt resistance and curly top damage impacted the southern valley yields, while Fusarium Race 3, also known as the COVID-19 of the tomato world, spread fast throughout California. Seed breeders are working hard to respond with resistant varieties, and the Fusarium Race 3 resistance will become part of the standard resistance package of tomato varieties grown in California.

The heavy smoke-filled skies California experienced this summer interfered with the tomato ripening schedule, which delayed maturity and harvest. Despite this season’s challenges, the average state yield per acre should be slightly higher than in 2018.

The 2020 season saw three 1 mm ton weeks of tomatoes processed versus four weeks in 2019 and a consecutive string of eight weeks in 2018. This decline of 1 mm ton weeks may have resulted from shorter crops or processing capacity reductions, or both.

A consolidating industry set high expectations on processors for the 2020 organic crop. The first few weeks of the season experienced good yields; however, the remainder saw only a scattering of favorable yields, ending the season with 526,000 tons. This total was 23% over the 2019 hail impacted year yet still fell short of 2020 intentions, leaving the industry in short supply. 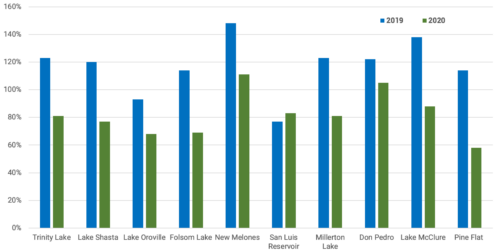 Looking ahead, California will largely be influenced by the 2020 La Niña climate pattern, which is currently weak and expected to become moderate in strength in the coming months. After a dry fall, odds predict below-average precipitation; however, there is also a chance of being near or above average as well. La Niña is only one factor that impacts winter weather in California.

As of early November, most California reservoir levels are far below the historical average. With the uncertainty of precipitation for the year and a new administration taking office looking to put back some of the current administration’s environmental restrictions, California agriculture’s water outlook is not optimistic.

The California agriculture industry looks to increase the minimum wage from $13 per hour to $14 for companies with 26 or more employees and overtime beginning after 8.5 hours of work, down from 9 hours in 2019.

It appears that the issues that plagued getting seed into California for the 2020 crop year are not an issue for 2021. Available seed supply and breeders continuing to produce additional Fusarium Race 3 varieties bring a glimmer of hope for 2021.