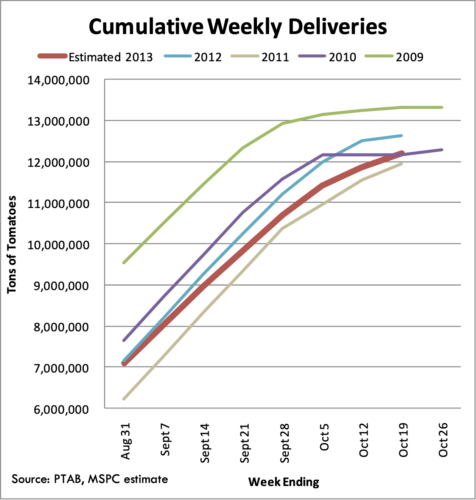 Labor Day weekend marks the end of summer for students, but not the end of California’s processing tomato season. As the days get shorter, processors still expect tomato deliveries through the middle of October. And as long as the rain stays away this year, packers want to process as many tomatoes as possible since the crop’s tonnage has fallen below preseason expectations.

In answer to growing demand internationally, California packers contracted for a near-record of 13.1 million tons of tomatoes, according to the USDA/NASS California Processing Tomato Report in May. But an unusually high occurrence of Beet Curly Top Virus appeared in June and ravaged the southern growing region’s early crop. As a result, forecasts for the crop declined sharply.

Due to heat in early summer, harvesters entered the fields about two weeks earlier than last year and found field yields averaging 30% below expectations in the south due to Curly Top Virus damage. By August, when the season is at its peak, the harvesters had worked through the worst southern fields, and average yields were only off about 5% for that month. Notably, favorable weather conditions in the northern growing regions resulted in average yields above expectations by 5% or more. Also, in southern fields untarnished by the Curly Top Virus, field yields exceeded the plan.

As of August 30, the USDA/NASS reported expectations at 12.5 million tons which is only a 4.6% drop from its May estimate. With only 7 million tons delivered through August, sources close to the field think the report’s forecast is overly optimistic, and the industry should expect something closer to 12 million tons.

To reach 12.5 million tons, another 5.5 million tons would need to be delivered over the remaining 6 weeks of the season. As a result, weekly deliveries would need to remain above 1 million tons for most of September before they begin their normal sharp tapering in October. But, indications from the fields are that 1 million ton weeks are behind us, and the peak of the season has passed. The Processing Tomato Advisory Board (PTAB) has dropped its projected deliveries to only 936,000 tons for the first week of September. PTAB stated that “a couple of companies dramatically lowered their weekly projection” and mentioned increases in green tomatoes and materials other than tomatoes (MOT).

1. A hiccup during planting is slowing down deliveries. A heat wave in May slowed transplanting as seedlings don’t thrive in high temperatures. Some factories are now dealing with the effect of that lull during planting.

2. The overabundance of green tomatoes is the result of mixed maturity, known as a “split set.” Fruit development was affected by a heat wave in early July, leaving the vines with both green and red tomatoes.

3. Materials Other than Tomatoes (MOT) can be anything from dirt to rocks, but it’s typically an overabundance of vine. It seems packers are dealing with more thick vine than usual which is likely caused by vines that died from Curly Top Virus.

Predicting the final outcome of the 2013 season is still anyone’s guess. Several weeks of harvest still remain and weather can play a role in the total tons delivered. However, Morning Star’s diverse geographical sourcing of tomatoes will mitigate some impact of this rough season for our customers.

Beet Curly Top Virus is a member of the geminivirus family. It can only be vectored from plant to plant by the Sugar Beet Leaf Hopper. The tiny insect winters in the foothills and migrates to farmland as the vegetation dries up. Although leaf hoppers don’t feed on tomato plants, they do taste the leaves. Once bitten by an infected Sugar Beet Leaf Hopper, the plant typically shows symptoms after 14 days, then dies.

In 2013, early rains coupled with very limited rainfall after the first of the year created the

perfect storm for an increased population of Sugar Beet Leaf Hoppers to quickly move from the foothills and out to the Valley. To minimize the spread of the disease, the state administers a spray program to help control the population of the insect, but this year’s high winds, during the critical spray period, hampered implementation of the state’s program.

While these same conditions may not repeat again, growers and researchers are looking for ways to prevent this kind of damage from reoccurring. There are currently no commercial varieties of tomatoes available resistant to the virus.