The last weekend in April brought some long-awaited rain and snow to California, but it was too little and too late. Unfortunately, the “D” word is starting to be widely used within California and other western states. As can be seen in Figure 1, a large portion of the Central Valley, our primary processed tomato growing region, currently registers at the Severe Drought stage, though a few counties still remain in the “Moderate” stage. 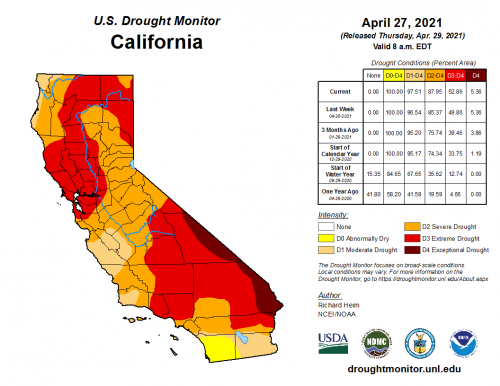 Water allocations are still on hold for the southern federal districts. The small 5% allocation they were given is not yet available for delivery. The State Water Project allocation was reduced, as of March 23rd, to 5% versus the initial allocation, in December 2020, of 10%. 2021 appears to be a year in which water issues only seem to get worse. On April 15th,  potential water transfers meant to move water over to the Westside were cancelled. The U.S. Bureau of Reclamation has elected to curtail Shasta Reservoir releases through spring and mid-summer in order to benefit endangered salmon species. All reservoirs, but one small one in southern California, are below historic levels.

California’s weather heading into our 2021 season has been mixed. We experienced a few isolated freezing temperatures in the San Joaquin Valley after planting began in February, that damaged some fields, as well as seedlings in the greenhouses. There have been days with high winds and high temperatures that halted transplanting in order to prevent damage to the plants. Each year it feels as though we are dealing with ever increasing extremes. Despite the weather problems, most growers are happy with the progress of their tomato fields.

Even with the water situation, California still has an opportunity for a good crop of tomatoes, even though it may fall below the early intentions of 12.1 million tons. Once the growers sorted through the initial cutbacks of water supply, not many acres were dropped. However, there also have not been as many acres added as in the past years, even with a good raw tomato price settled upon.

One tool that quite a few growers have started using in an effort to become more efficient with the limited water is the Gradient Crop Yield Solutions water management program. This program is housed under the Morning Star affiliate California Sun Grower Services. This tool not only provides growers with water scheduling, but also provides real-time monitoring of their field through an internet program (Figure 2). Growers using the system have realized its benefits in cost savings along with improved yields, a better uniform fruit quality, a more even maturity, and less soil compaction at harvest. This is just one of the solutions being worked on by Morning Star’s R&D team to bring efficiency and innovation to its growers. 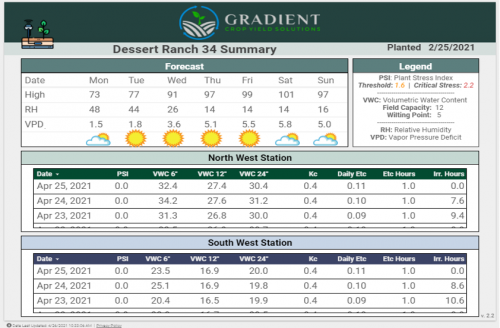 On a positive note, dry years in California usually still produce good crops, and it looks like the threat of the curly top virus is not currently an issue. The dry winter curtailed early activity of the sugar beet leafhopper (BLF), the insect responsible for the transmission of the curly top virus. Only a few were found in sweep nets prior to March 31st, but increased numbers were observed by April 8th in the Coalinga foothills. By mid-April The Beet Curly Top Virus Control Program (BCTVP) alerted growers of a possible BLF move up into the San Joaquin Valley on or around April 16th. Fortunately, the BCTVCP was able to obtain permission to conduct aerial treatment on the fields identified with high counts. A total of 6,170 acres were treated in Fresno County.

Finding labor has been a slight challenge and we expect this to continue throughout the year, until some of the COVID-19 relief programs have ended. Field activities carry on and Morning Star continues to recruit additional seasonal labor.

As echoed in past articles, the determination of California tomato growers enables them to cope with the challenges thrown at them whether it be weather, insects, disease, labor, politics, market, environmental issues, or anything else that may arise. California’s resiliency will be a key factor in making 2021 a successful tomato year.